In response to the COVID-19 pandemic, Totten Tubes is considered an essential business and will remain open to serve the needs of our valuable customers. Totten Tubes is taking the necessary measures to ensure the safety of our employees while serving our customers. Thank you for your business and support during these uncertain times. Please take care, stay well and know Totten Tubes is committed to the vital industries and customers we serve. Please give us a call at 800-882-3748 if you have any additional questions. 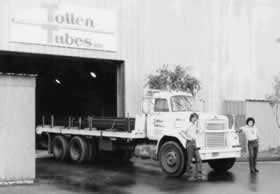 In 1955, Marvin Totten established the first Totten Tubes warehouse in South Central Los Angeles. With minimal equipment and one employee, Marvin carved the Totten name into the industry order by order.

In 1960, the company built a new facility in East Los Angeles where it would have more room for a larger staff and a growing inventory. Bringing his three sons into the business (Dave in ’63, Jeff in ’65, and Tracy in ‘76) Marvin retired from daily duties in 1992 and cheered on his business from the boardroom.

The company has grown regionally over the last few decades: a branch in San Diego (1983), moved headquarters to Azusa (1999), a branch in Phoenix (2000), a branch in Northern California (2011), and most recently a branch in Vancouver, WA.